It has been a wet few days, and the best place to be when camping in the wet is inside somewhere other than the campsite. We have had two evening meals out at a nice but empty restaurant where we were the only customers, and only one item was on the menu. Rabbit stew one night, boiled lamb the next (the boys had a bowl of spaghetti, then grilled chicken). Four courses, starter, salad, main and pudding, with wine – €15 adults, €5 children. Perfect!

I was released for a couple of hours on Sunday and walked along the beach with Meg. I stumbled upon a washed up turtle outside a wooden beach shack.

A sad and grim find, but all creatures die sometime. Today we managed to get out on our bikes and we all rode along the road towards the village. I noticed a little track leading down towards the shack, we followed it so I could show the boys the turtle. Someone had put a rope around its neck and had dragged it away from the shack. 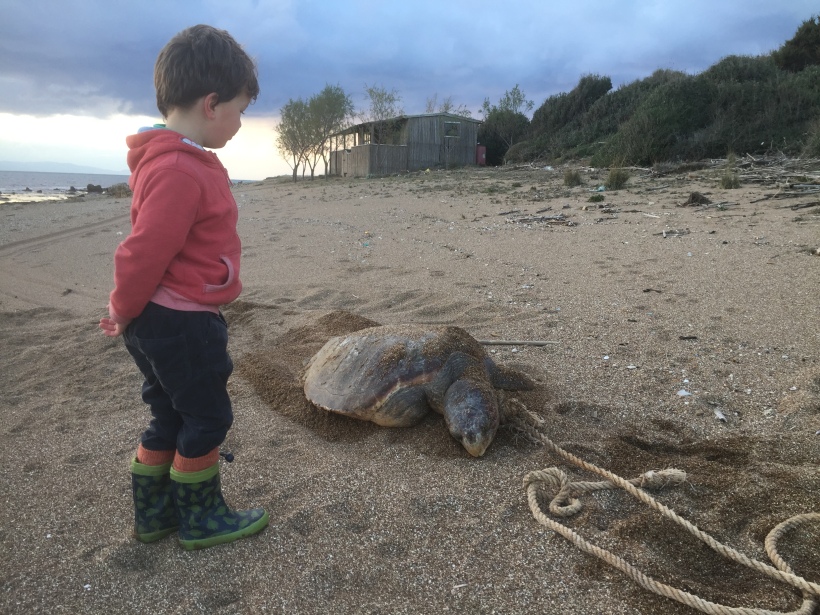 You can actually see the track where it had been dragged in the top photo.

It has left me wondering what someone wants with a dead turtle. I suppose its shell might have some value to someone.

The Beach is turning out to be an excellent playground for Ben and Jack. There is a stream at one end and they both love playing in it, and building bridges and dams with washed up rubbish.

The saga over our school place for Ben might finally be over. It seems that both Lewisham and Greenwich school admissions have put their heads together and concluded that our recently vacated flat next to our preferred choice of school for Ben is our home address, and our home 1/2 mile away from the school is not our home address. I’m convinced they have misdirected themselves on the School’s Admissions Code, but as we have inadvertently gained an advantage in securing a place for both Ben and, under the sibling rule, for Jack at our preferred school we cannot really complain. We have also been informed that once a place is offered, it cannot be withdrawn unless a deliberately misleading or fraudulent application was made. In her customary snide style, the Greenwich admissions manager prefaced this information with “as you are aware”. Why would I be aware of that!? We have gone to huge lengths attempting to correct Greenwich admissions on their interpretation of Ben’s home. Chips and shoulders spring to mind.